I've recently been sold on the idea of no-till with cover crops by this lady:

Thing is, to get the cover crop going, I'm going to have to clear out or weaken the weeds that are already established. Since Operation Goat On A Rope can't be implemented until we have a goat to put on said rope, I decided to try an experiment to see which of the following three methods would give the best weed control for the least effort: pulling them out with the field screw and rake, crimping then covering with 6 inches of leaves or crimping only.

As you can see from the picture, after a week the row that was only crimped is rife with grasses, sticking straight up like so many middle fingers. This is probably not going to be sufficient to give my cover crops the advantage they need to get established; moving on.

The second row, I painstakingly loosened the weeds with my trusty field screw, raked them up for pig food then sowed a mixture of: buckwheat, oats and sorghum to cover things up. None of the cover crop has germinated since I was banking on a typhoon that never came and consequentially didn't water. I expect germination after it finally rains. I'm in no rush. Ultimately, I feel like this approach took about as much time and energy as it took to transfer a 6 inch killer mulch to the next row though this method yielded three heaping wheelbarrows full of pig food.

On the third row, I broke out the hand crimper all over again and pinned down that grass like my name was GSP. I then covered everything with leaves. Some of the leaves in our compost pile are from aleopathic trees (not sure about the English name of this tree species) making this killer mulch extra deadly. True, I may find that I have effectively shot myself in the balls when I transplant broccoli into this row and find that aleopathy swings both ways or I might find that brassicas aren't bothered by this particular aleopathic compound. Only experimentation will tell.

Keep you all updated! 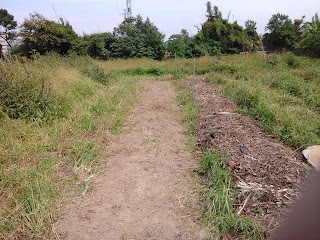